The effects of inbreeding have an effect on IQ, as well as the amount of clannishness that leads to more inter-group violence.

According to one of my favorite researchers, Linda Gottfredson, in this article she wrote for the New Scientist:

Not only that, as more people travelled and married outside their local group, populations may have benefited genetically from hybrid vigour.

Inbreeding is known to lower intelligence, and outbreeding can raise it.

“Marrying outside their local population” means not marrying the immediate people in their local group, not other races.

So inbreeding (up to first and second cousins) is the cause of lower IQ. According to Razib Khan, inbreeding can lower IQ by 2.5 to 10 points.  Outbreeding meaning breeding with others with less similar genes (not race-mixing). Talking about inbreeding and lowered IQ, we have to talk about Islam.

In a paper on the mean IQ of Muslims and non-Muslim countries, Donald Templer states that the Muslim world, which used to have great intellectual achievements from the 7th to 12th centuries, has seen an underrepresentation in highly creative contributions in science journals. This is because of the inbreeding effect (2.5 to 10 point drop in IQ) of close cousin marriage. He ends up saying that genetic factors are more important than social/cultural/religious values (back to the inbreeding, causing defects and lowering IQ) in regards to IQ.

In this great article by hbd chick, her definition for clannishness is:

“a set of behaviors and innate behavioral traits and predispositions which, when found in a population, result in the members of that population strongly favoring, in all areas of life, themselves, their family members — both near and extended, and even closely allied associates (esp. in clannish societies which are not arranged into clans), while at the same time strongly disfavoring those considered to be non-family and all unrelated, non-allied associates.”

Which you can obviously see in populations that are more inbred than others.

Those innate behaviors which result in the favoring in all areas of life, themselves and their family, is a result of genetic similarity because of the closely related genes they share (the father’s brother’s daughter type is the most common in the Muslim world). Also, first and second cousin marriages are more common, which also result in increased altruism for their own family because of the close genetic similarity, but also those in their own group, which is mediated by the brain hormone oxytocin. I would assume that all of these clannish/inbred groups would have higher levels of oxytocin in the brain. The same chemical is also known as the ‘love chemical’, which would make sense with ‘love for your own group or family’.

That same drop in IQ also made them more susceptible to the dominant religion (Islam) in the region. Causing more fanaticism (which is already there from the low IQ, as well as the between group strife with other ‘clans’), this also leads to more strife between groups in the region. 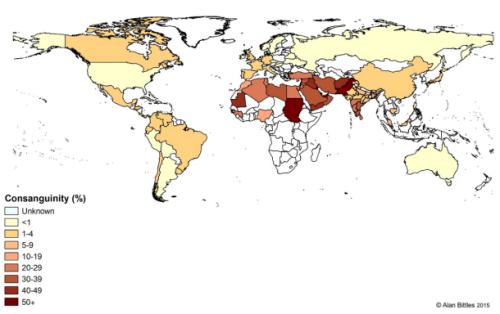 In the map seen above, you see the consanguinity rates for the world. The rates with the highest amount in the world, are in the Middle East and North Africa, as well as South East Asia, the majority Muslim parts of the world, which leads to depressed IQ, group violence, and violence against others not like themselves (as mediated through oxytocin).

That same clannishness is being brought to Europe, and with more increased cousin/brother/sister marriages, clannishness/genetic defects will increase, causing more strain (as well as violence due to that clannishness) that is already currently put on them through the ‘migration’.

Whites in Europe, as well as America, need that same clannishness. But obviously breeding too closely with those related to you (having genes that are too similar, which lead to a multitude of effects of inbreeding depression, lower IQ included) leads to a slew of negative effects.

Let’s see this article where a Muslim says “Why Ban Cousin Marriage?”.

The risk of birth defects in children born to first cousins is increased from a baseline of 3-4 percent to 4-7 percent according to the National Society of Genetic Councilors (NSGC). In this modern age, this risk could be mitigated by mandating — as the State of Maine has done — pre-marital genetic testing. The NSGC, however, considers the risk to be so insignificant that it does not recommend additional testing or screening.

As you cross the scientific hurdles, you will be confronted with a mountain of taboo cloaked in words like “gross,” “icky,” “yucky.” But where do such taboo feelings originate from? Not a single verse in the Torah, Bible or Quran — books revered by three billion followers of the three Abrahamic religions — prohibits cousin marriage, which were common in Jewish, Christian and Islamic history. The Bible even mentions various accounts of cousin marriages, such as Jacob and Rachel, Milcah and Nahor, and Jacob and Leah, in the book of Genesis. And please don’t quote the incest prohibitions listed in Leviticus 18. It never mentions first cousins.

Third cousins have the greatest number of kids. Also, third cousin marriage doesn’t seem to affect IQ being that Iceland’s average IQ is 101. I don’t even think anyone brings up a religious basis for first cousin marriage, just the deleterious effects of it are the reason why not to mention it’ll be someone you’ve most likely grown up with your whole life. Your family has a unique smell, which obviously evolved to make you not want to mate with your family. This shows that nature made it so that we don’t inbreed too closely, and that for fertility, third cousin marriage is best.

This is the ultimate argument made in support of banning cousin marriages. It’s so obviously wrong that “You don’t have to be an Einstein to figure it out.” In the evidence driven societies we have a different word to describe such claims: myth. Myths are best broken by data. The fact that 20 percent of global marriages take place between first cousins and most societies, including Europe and Canada, consider cousin marriages to be legal should give us a pause.

It’s fine guys!!! Einstein did it too!! I’m sure this is a logical fallacy though it escapes me at the moment. Just because someone who is extremely intelligent does something, doesn’t mean that it’s OK to do.

To conclude, the cause for the constant strife (not even getting in to any other external factors) in the Middle East is due to constant inbreeding depression, which dropped IQ, which led to more clannishness due to more cousin marriage, and more inter-group violence.

Third cousin marriages, as seen in Iceland, are fine, it has no negative effects on IQ and they are more fertile because of it.

I personally think a huge part of the reason for the current situation in Europe is obviously the high European altruism and a high rate of individualism. As you can see from the map above, the countries with the highest amount of individualism have the most problem with the ‘migrants’ and are also the most liberal and atheist. The collectivist countries obviously have a stronger religious component, which in Eastern Europe you see them pushing back harder against Islam. The same in Spain, and Southern Italy (also the Mafia said they will take care of IS). Those collectivist countries (or regions) push back harder because they have something to fight for, their religion as well as people, being that they are more collectivist than the individualist countries. This map roughly matches up to this situation in Europe.

The more collectivist countries are more clannish, due to religion. Those countries will push back the hardest, even harder than the individualist countries.