Back in April of last year, I wrote an article on the problems with facial ‘reconstructions’ and why, for instance, Mitochondrial Eve probably didn’t look like that. Now, recently, ‘reconstructions’ of Nariokotome boy and Neanderthals. The ‘reconstructors’, of course, have no idea what the soft tissue of said individual looked like, so they must infer and use ‘guesswork’ to show parts of the phenotype when they do these ‘reconstructions’.

My reason for writing this is due to the ‘reconstruction’ of Nefertiti. I have seen altrighers proclaim ‘The Ancient Egyptians were white!’ whereas I saw blacks stating ‘Why are they whitewashing our history!’ Both of these claims are dumb, and they’re also wrong. Then you have articles—purely driven by ideology—that proclaim ‘Facial Reconstruction Reveals Queen Nefertiti Was White!‘

This article is garbage. It first makes the claim that King Tut’s DNA came back as being similar to 70 percent of Western European man. Though, there are a lot of problems with this claim. 1) the company IGENEA inferred his Y chromosome from a TV special; the data was not available for analysis. 2) Haplogroup does not equal race. This is very simple.

Now that the White race has decisively reclaimed the Ancient Egyptians

The white race has never ‘claimed’ the Ancient Egyptians; this is just like the Arthur Kemp fantasy that the Ancient Egyptians were Nordic and that any and all civilizations throughout history were started and maintained by whites, and that the causes of the falls of these civilizations were due to racial mixing etc etc. These fantasies have no basis in reality, and, now, we will have to deal with people pushing these facial ‘reconstructions’ that are largely just ‘art’, and don’t actually show us what the individual in question used to look like (more on this below).

And, perhaps most importantly for people who push ‘reconstructions’ of ancient hominin: “The decomposition of the soft tissue parts of paleoanthropological beings makes it impossible for the detail of their actual soft tissue face morphology and variability to be known, as well as the variability of the relationship between the hard and the soft tissue.” and “Hence any facial “reconstructions” of earlier hominids are likely to be misleading [4].”

As an example for the inaccuracy of these ‘reconstructions’, see this image from Wikipedia: 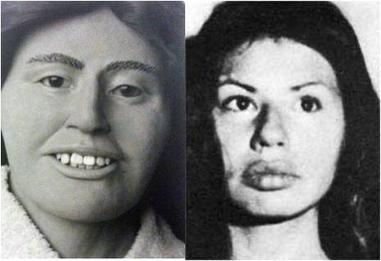 The left is the ‘reconstruction’ while the right is how the woman looked. She had distinct lips which could not be recreated because, again, soft tissue is missing.

3) That this discipline is ‘credible’ because it is ‘partly science’, but Stephan argues that calling it a science is ‘misleading’. But he writes (pg 196): “The fact that several of the commonly used subjective guidelines when scientifically evaluated have been found to be inaccurate, … strongly emphasizes the point that traditional facial approximation methods are not scientific, for if they were scientific and their error known previously surely these methods would have been abandoned or improved upon.”

And finally, 4) We know that ‘reconstructions’ work because they have been successful in forensic investigations. Though this is not a strong claim because other factors could influence the discovery, such as media coverage, chance, or ‘contextual information’. So these forensics cases cannot be pointed to when one attempts to argue for the utility of facial ‘reconstructions’. There also seems to be a lot of publication bias in this literature too, with many scientists not publishing data that, for instance, did not show the ‘face’ of the individual in question. It is largely guesswork. “The inconsistency in reports combined with confounding factors influencing casework success suggest that much caution should be employed when gauging facial approximation success based on reported practitioner success and the success of individual forensic cases” (Stephan, 2003: 196).

So, 1) the main point here is that soft tissue work is ‘just a guess’ and the prediction methods employed to guess the soft tissue have not been tested. 2) faces are not ‘reconstructed’ from skulls. 3) It’s hardly ‘science’, and more of a form of art due to the guesses and large assumptions poured into the ‘technique’. 4) ‘Reconstructions’ don’t ‘work’ because they help us ‘find’ people, as there is a lot more going on there than the freak-chance happenings of finding a person based on a ‘reconstruction’ which was probably due to chance. Hayes (2015) also writes: “Their actual ability to meaningfully represent either an individual or a museum collection is questionable, as facial reconstructions created for display and published within academic journals show an enduring preference for applying invalidated methods.”

Wilkinson (2010) largely agrees, but states that ‘artistic interpretation’ should be used only when “particularly for the morphology of the ears and mouth, and with the skin for an ageing adult” but that “The greatest accuracy is possible when information is available from preserved soft tissue, from a portrait, or from a pathological condition or healed injury.” But she also writes: “… the laboratory studies of the Manchester method suggest that facial reconstruction can reproduce a sufficient likeness to allow recognition by a close friend or family member.”

So to sum up: 1) There is insufficient data for tissue thickness. This just becomes guesswork and, of course, is up to artistic ‘interpretation’, and then becomes subjective to whichever individual artist does the ‘reconstruction’. Cartilage, skin and fat does not fossilize (only in very rare cases and I am not aware of any human cases). 2) There is a lack of methodological standardization. There is no single method to use to ‘guesstimate’ things like tissue thickness and other soft tissue that does not fossilize. 3) They are very subjective! For instance, if the artist has any type of idea in his head of what the individual ‘may have’ looked like, his presuppositions may go from his head to his ‘reconstruction’, thusly biasing a look he/she will believe is true. I think this is the case for Mitochondrial Eve; just because she lived in Africa doesn’t mean that she looks similar to any modern Africans alive today.

I would make the claim that these ‘reconstructions’ are not science, they’re just the artwork of people who have assumptions of what people used to look like (for instance, with Nefertiti) and they take their assumptions and make them part of their artwork, their ‘reconstruction’. So if you are going to view the special that will be on tomorrow night, keep in the back of your mind that the ‘reconstruction’ has tons of unvalidated assumptions thrown into it. So, no, Nefertiti wasn’t ‘white’ and Nefertiti wasn’t ‘white washed’; since these ‘methods’ are highly flawed and highly subjective, we should not state that “This is what Nefertiti used to look like”, because it probably is very, very far from the truth. Do not fall for facial ‘reconstructions’.

By RaceRealist in Facial Reconstruction, HBD on February 6, 2018.
← IQ, Interoception, and the Heartbeat Counting Task: What Does It Mean? Steroid Mythconceptions and Racial Differences in Steroid Use →