Home » Black-White IQ » Heritability, the Grandeur of Life, and My First Linkfest on Human Evolution and IQ

Heritability, the Grandeur of Life, and My First Linkfest on Human Evolution and IQ

Benjamin Steele finally replied to my critique of his ‘strong evidence and argument’ on race, IQ and adoption. He goes on to throw baseless ad hominem attacks as well as appealing to motive (assuming my motivation for being a race realist; assuming that I’m a ‘racist’, whatever that means). When I do address his ‘criticisms’ of my response to him, I will not address his idiotic attacks as they are a waste of time. He does, however, say that I do not understand heritability. I understand that the term ‘heritable’ doesn’t mean ‘genetic’. I understand that heritability is the proportion of phenotypic variance attributed to genetic variance. I do not believe that heritability means a trait is X percent genetic. 80 percent of the variation in the B-W IQ gap is genetic, with 20 percent explained by environmental effects. Note that I’m not claiming that heritable means genetic. All that aside, half of his reply to me is full of idiotic, baseless and untrue accusations which I will not respond to. So, Mr. Steele, if you do decide to reply to my response to you this weekend, please leave the idiocy at the door. Anyway, I will tackle that this weekend. Quick note for Mr. Steele (in case he reads this): if you don’t believe me about the National Crime and Victimization Survey showing that police arrest FEWER blacks than are reported by the NCVS, you can look it up yourself, ya know.

I’m beginning to understand why people become environmentalists. I’ve recently become obsessed with evolution. Not only of Man, but of all of the species in the world. Really thinking about the grandeur of life and evolution and what leads to the grand diversity of life really had me thinking one day. It took billions of years for us to get to the point we did today. So, why should we continue to destroy environments, displacing species and eventually leading them to extinction? I’m not saying that I fully hold this view yet, it’s just been on my mind lately. Once a species is extinct, that’s it, it’s gone forever. So shouldn’t we do all we possibly can to preserve the wonder of life that took so long to get to the point that we did today?

Some interesting articles to read:

Study: IQ of firstborns differ from siblings (This is some nice evidence for Lassek and Gaulin’s theory stating why first-born children have higher IQs than their siblings: they get first dibs on the gluteofemoral fat deposits that are loaded with n-3 fatty acids, aiding in brain size and IQ.)

Why attitude is more important than IQ (Psychologist Carol Dweck states that attitude is more important than IQ and that attitudes come in one of two types: a fixed mindset or a growth mindset. Those with a fixed mindset believe ‘you are who you are’ and nothing can change it while those with a growth mindset believe they can improve with effort. Interesting article, I will find the paper and comment on it when I read it.)

Positively Arguing IQ Determinism And Effect Of Education (Intelligent people search for intellectually stimulating things whereas less intelligent people do not. This, eventually, will lead to the construction of environments based on that genotype.)

A scientist’s new theory: Religion was key to humans’ social evolution (Nicholas Wade pretty much argues the same in his book The Faith Instinct: How Religion Evolved and Why It Endures. It is interesting to note that archaeologists have discovered what looks to be the beginnings of religiousity around 10kya, coinciding with the agrigultural revolution. I will look into this in the future.)

Galápagos giant tortoises show that in evolution, slow and steady gets you places (Interesting read, on tortoise migration)

Will Mars Colonists Evolve Into This New Kind of Human? (Very interesting and I hope to see more articles like this in the future. Of course, due to being a smaller population, evolution will occur faster due to differing selection pressures. Smaller populations incur more mutations at a faster rate than larger populatons. Will our skin turn a reddish tint? Bone density will decline leading to heavier bones. The need for C-sections due to heavier bones will lead to futher brain size increases. This is also going on on Earth at the moment, as I have previously discussed. Of course differences in culture and technology will lead the colonizers down different paths. I hope I am alive to see the first colonies on Mars and the types of long-term effects of the evolution of Man on the Red Planet.) 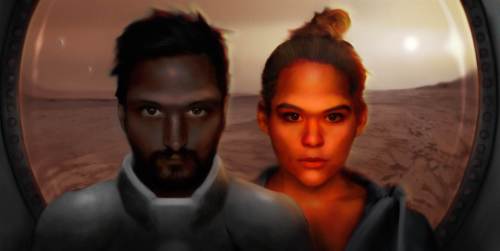 Evolution debate: Are humans continuing to evolve? (Of course we are)

Did seaweed make us who we are today? (Seaweed has many important vitamins and minerals that are imperative for brain development and growth—most importantly, it has poly-unsaturated fatty acids (PUFAs) and B12. We are only able to acquire these fatty acids through our diet—our body cannot synthesize the fatty acid on its own. This is just growing evidence for how important it is to have a good ratio of n-3 to n-6.)

Desert people evolve to drink water poisoned with deadly arsenic (More evidence for rapid evolution in human populations. AS3MT is known to improve arsonic metabolism in Chile and Argentina. Clearly, those who can handle the water breed/don’t die while those who cannot succumb to the effects of arsenic poisoning. Obviously, over time, this SNP will be selected for more and more while those who cannot metabolize the arsonic do not pass on their genes. This is a great article to show to anti-human-evolution deniers.)

Here Are the Weird Ways Humans Are Evolving Right Now (CRISPR and gene editing, promotion of obesity through environmental factors (our animals have also gotten fatter, probably due to the feed we give them…), autism as an adaptation (though our definition for autism has relaxed in the past decade). Human evolution is ongoing and never stops, even for Africans. I’ve seen some people claim that since they never left the continent that they are ‘behind in evolution’, yet evolution is an ongoing process and never stops, cultural ‘evolution’ (change) leading to more differences.)

‘Goldilocks’ genes that tell the tale of human evolution hold clues to variety of diseases (We really need to start looking at modern-day diseases through an evolutionary perspective, such as obesity, to better understand why these ailments inflict us and how to better treat our diseases of civilization.)

Understanding Human Evolution: Common Misconceptions About The Scientific Theory (Don’t make these misconceptions about evolution. Always keep up to date on the newest findings.)

Restore Western Civilization ( Enough said. As usual, gold from Brett Stevens. Amerika.org should be one of the first sites you check every day.)

I guess this was my first linkfest (ala hbd chick). I will post one a week.