Home » Philosophy » A Simple Argument for the Existence of Race

A Simple Argument for the Existence of Race

Race deniers say that there is too small of a genetic distance between races to call the so-called races “races”. They latch on to Lewontin’s 1974 analysis, trumpeting that genetic distance is too small for there to be true “races”. There is, however, a simple way to bypass the useless discussions that would ensue if one cites genetic evidence for the existence of race: just use this simple argument:

P1) There are differences in patterns of visible physical features which correspond to geographic ancestry
P2) These patterns are exhibited between real groups, existing groups (i.e., individuals who share common ancestry)
P3) These real, existing groups that exhibit these physical patterns by geographic ancestry satisfy conditions of minimalist race
C) Therefore race exists and is a biological reality

This argument is simple; anyone who denies this needs to provide a good enough counter-argument, and I’m not aware of any that exist to counter the argument.

P1 shows that there are patterns of visible physical features which correspond to geographic ancestry. This is due to the climates said race evolved in over evolutionary history. Since these phenotypes are not randomly distributed across the globe, but show distinct patterning based on geographic ancestry, we can say that P1 is true; different populations show patterns of different physical features which are not randomly distributed across the globe. Further, since P1 establishes that races are populations that look different from each other, it guarantees that groups like the Amish, social classes etc are not counted as races. P1 further allows a member of a given race to not show the normative physical characters that are characteristic of that race. It further allows for the possibility that individuals from two different races may not differ in their physical characters. These visible physical characters that differ by populations we then call races also need to be heritable to be biological. “Because the visible physical features of race are heritable, the skin color, hair type, and eye shape of children of Rs tend to resemble the skin color, hair type, and eye shape of their parents” (Hardimon, 2017: 35). P1 is true.

P2 shows that these patterns of visible physical features are exhibited between real, existing groups. That is, the groups that exhibit these patterns exist in reality. No one denies this either. Differences in physical features that these real, existing groups exhibit can then be used as proxies for factors in P1. Though, like with which populations figure into this concept, the minimalist race concept doesn’t say—it only establishes the biological existence of races. “In recent years the concept of the continent has come under fire for not being well defined. 59 It is of interest that the formation of the concepts CONTINENT and RACE are roughly coeval. One wonders if the geneses of the two ideas are mutually entwined. Could it be that our idea of continent derives in part from the idea of the habitat of a racial group? Could it be that the idea of a racial group gets part of its content from the idea of a group whose aboriginal home is a distinctive continent? Perhaps the concepts should be thought of as having formed in tandem, each helping to fix the other’s reference” (Hardimon, 2017: 51). Since these real, existing populations that were geographically separated for thousands of years show these visible physical patterns, P2 is true.

P3 follows from the specification of the concept of minimalist race. If these populations that exhibit these distinct visible characters and if they are non-randomly distributed across the globe then this satisfied the argument for the concept of minimalist race. The specification of the minimalist concept of race states that groups satisfy the requisites for the concept by being distinguishable by patterns of visible physical features (P1) and that individuals who share a common ancestry peculiar to them which derive from a distinct geographic location (P2) exist as real groups. Since P1 and P2 are true, P3 follows logically from P1 and P2, which then leads us to the conclusion which is true and establishes the argument for the minimalist concept of race as a sound and valid argument.

C is then the logical conclusion of the three premises: race exists and is a biological reality since the patterns of visible physical features are non-randomly distributed across the globe and are exhibited by real, existing groups. Since all three premises are true and the conclusion is true, it is a valid argument; since the premises are true the argument is sound. No one can—logically—deny the existence of race when presented with this logical proof.

Though notice the argument doesn’t identify which populations are designated as “races” (that’s for another article), the argument just establishes that race exists and it exists as a biological reality. Notice also how this conception of race is sort of like the “racialist concept”, but it takes it down to its barest bones—only taking the normatively important, superficial biological physical features (these features establish minimalist races as biologically existing).

1) Are there differences in patterns of visible physical features that correspond to geographic ancestry? Yes.

2) Are these patterns exhibited by real, existing groups? Yes.

These three simple questions (just take the premises and ask them as questions) will have one—knowingly or not—admit to the biological reality and existence of race.

Do note, though, nothing in this argument brings up anything about what we “can’t see”, meaning things like “intelligence” or mores of these races. This concept is distinct from the racialist concept in that it does not mention normatively important characters; it does not posit a relationship between visible physical characters and normatively important characters; and it does not “rank” populations on some type of scale.  “Also, the conjoint fact that a group is characterized by a distinctive pattern of visible physical characteristics and consists of members who are linked by a common ancestry and originates from a distinctive geographic location is of no intrinsic normative significance. The status of being a minimalist race has no intrinsic normative significance“ (Hardimon, 2017: 32).

Clearly, one does not need to invoke genetic differences to show that race exists as a biological reality. That races differ in patterns of visible physical features which are inherited from the parents and are heritable establishes the biological reality of minimalist race. I really see no way that one could, logically, deny the existence of race given the argument provided in this article. Race exists and is a biological reality and the argument for the existence of minimalist race establishes this fact. Races differ in physiognomy and morphology; these physical differences are non-randomly distributed by geographic ancestry/at the continental level. These populations that show these physical differences share a peculiar ancestry. Knowing these facts, we can safely infer the existence of race. It is the only logical conclusion to come to. Note that the minimalist concept is deflationist—meaning that racialist races do not exist and that this concept enjoys what the racialist concept was supposed to, it is deflationary in the aspect that it takes the normative physical differences from the racialist concept. It is realist since it acknowledges the existence of minimalist race as genetically grounded and relatively superficial but still very significant biological reality of race.

Race exists and is a biological reality, even if it is ‘socially constructed’ (what isn’t?), our social constructs still correspond to differing breeding populations who share peculiar ancestry and show patterns of visible physical features establish the existence of race. 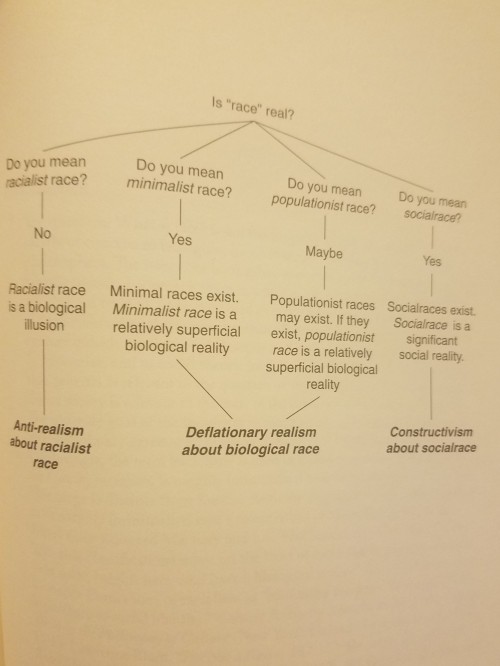 (I also came across a book review from philosopher Joshua Glasgow (Book Review Rethinking Race: The Case for Deflationary Realism, by Michael O. Hardimon. Harvard University Press, 2017. Pp. 240.), author of A Theory of Race (2009) who has some pretty good critiques against Hardimon’s theses in his book, but not good enough. I am going to cover a bit more about these concepts then discuss his article. I will also cover “Latinos” and mixed race people as regards these concepts as well.)

(Where P is population, C is continent and T is trait(s)

Population P that evolved in continent C have physical traits T which correspond to C.

Ps correspond to C because P evolved in C. Ps that evolved in Cs have differing physical features non-randomly distributed between Cs. Ps are Rs and R is race. Therefore race exists and is biological.