HBDers like to talk about this perception that their ideas are not really discussed in the public discourse; that the truth is somehow withheld from the public due to a nefarious plot to shield people from the truth that they so heroically attempt to get out to the dumb masses. They like to claim that the field and its practitioners are ‘silenced’, that they are rejected outright for ‘wrongthink’ ideas they hold. But if we look at what kinds of studies get out to the public, a different picture emerges.

The title of Cofnas’ (2019) paper is Research on group differences in intelligence: A defense of free inquiry; the title of Carl’s (2018) paper is How Stifiling Debate Around Race, Genes and IQ Can Do Harm; and the title of Meisenberg’s (2019) paper is Should Cognitive Differences Research Be Forbidden? Meisenberg’s paper is the most direct response to my most recent article, an argument to ban IQ tests due to the class/racial bias they hold that then may be used to enact undesirable consequences on a group that scores low—but like all IQ-ists, they assume that IQ tests are tests of intelligence which is a dubious assumption. In any case, these three authors seem to think there is a silencing of their work.

The problem is not that knowledge of such group intelligence differences is too dangerous, but rather that there is no valid knowledge to be found in this area at all. It’s just ideology masquerading as science.

When scientists are silenced by colleagues, administrators, editors and funders who think that simply asking certain questions is inappropriate, the process begins to resemble religion rather than science. Under such a regime, we risk losing a generation of desperately needed research.

But another part of me wonders whether research on race and intelligence—given the persistence of racism in the U.S. and elsewhere–should simply be banned. I don’t say this lightly. For the most part, I am a hard-core defender of freedom of speech and science. But research on race and intelligence—no matter what its conclusions are—seems to me to have no redeeming value.

And when he says that “research on race and intelligence … should simply be banned“, he means:

Institutional review boards (IRBs), which must approve research involving human subjects carried out by universities and other organizations, should reject proposed research that will promote racial theories of intelligence, because the harm of such research–which fosters racism even if not motivated by racism–far outweighs any alleged benefits. Employing IRBs would be fitting, since they were formed in part as a response to the one of the most notorious examples of racist research in history, the Tuskegee Syphilis Study, which was carried out by the U.S. Public Health Service from 1932 to 1972.

At the end of the 2000s, journalist William Saletan was big in the ‘HBD-sphere’ due to his writings on sport and race and race and IQ. But in 2018 after the Harris/Murray fiasco on Harris’ podcast, Saletan wrote:

Many progressives, on the other hand, regard the whole topic of IQ and genetics and sinister. That too is a mistake. There’s a lot of hard science here. It can’t be wished away, and it can be put to good use. The challenge is to excavate that science from the muck of speculation about racial hierarchies.

What’s the path forward? It starts with letting go of race talk. No more podcasts hyping gratuitous racial comparisons as “forbidden knowledge.” No more essays speaking of grim ethnic truths for which, supposedly, we must prepare. Don’t imagine that if you posit an association between race and some trait, you can add enough caveats to erase the impression that people can be judged by their color. The association, not the caveats, is what people will remember.

If you’re interested in race and IQ, you might bristle at these admonitions. Perhaps you think you’re just telling the truth about test scores, IQ heritability, and the biological reality of race. It’s not your fault, you might argue, that you’re smeared and misunderstood. Harris says all of these things in his debate with Klein. And I cringe as I hear them, because I know these lines. I’ve played this role. Harris warns Klein that even if we “make certain facts taboo” and refuse “to ever look at population differences, we will be continually ambushed by these data.” He concludes: “Scientific data can’t be racist.”

Of course “scientific data can’t be racist”, but the data can be used by racists for racist motives and the tool to collect the data could be inherently biased against certain groups meaning they favor certain groups too.

Saletan claims that IQ tests can be ‘put to good use’, but it is “illogical” to think that the use of IQ tests was negative and then positive in other instances; it’s either one or the other, you cannot hold that IQ testing is good here and bad there.

These types of assessments cannot be performed in a vacuum. There is a broader social context with which all investigators must engage to create meaningful and translatable research findings, including intelligence researchers. An important first step would be for the members of the genetics and behavioral genetics communities to formally and directly confront these challenges through their professional societies and the editorial boards of journals.

If traditional biases triumph over scientific rigor, the research will only exacerbate existing educational and social disparities.

it is important to remember that even if the community could keep race research at bay and out of the newspaper headlines, research on the genetics of intelligence would still not be expunged of all controversy.

Society at large already harbors genetic determinist attitudes and beliefs, and what the mainstream newspapers put out then solidifies the false beliefs of the populace. Even then, a more educated populace in regard to genes and trait ontogeny will not necessarily make them supportive of new genetics research and discoveries; they are even critical of such studies (Etchegary et al, 2012). Schweitzer and Saks (2007) showed that the popular show CSI pushes false concepts of genetic testing on the public, showing that DNA testing is quick, reliable, and prosecutes many cases; about 40 percent of the ‘science’ used on CSI does not exist and this, too, promulgates false beliefs about genetics in society. Lewis et al (2000) asked schoolchildren “Why are genes important?”, to which 73 percent responded that they are important because they determine characters while 14 percent responded that they are important because they transfer information, but none spoke of gene products.

Much data suggest that the stories promulgated by the kind of ‘elite media’ stories cited previously do not act as ‘magic bullets’ to be instantly absorbed by the reader, but rather are resisted, critiqued or accepted depending on the reader’s economic interests, health and social status and access to competing discourses. A recurring theme is that people dis[lplay a ‘two-track model’ in which they can readily switch between more genetic deterministic explanations for disease or different behaviors and those which favour environmental factors or human choice (Condit et al., 2009).

The so-called two-track model is simple: one holds genetic determinist beliefs for a certain trait, like heart disease or diabetes, but then contradict themselves and state that diet and exercise can ameliorate any future complications (Condit, 2010). Though, holding “behavioral causal beliefs” (that one’s behavior is causal in regard to disease acquisition) is associated with behavioral change (Nguyen et al, 2015). This seems to be an example of what Bo Wingard means when he uses the term “selective blank slatism” or “ideologically motivated blank slatism.” That one’s ideology motivates them to believe that genes are causal regarding health, intelligence, and disease or reject the claim must be genetically mediated too. So how can we ever have objective science if people are biased by their genetics?

Clearly, the public understands genes as playing more of a role when it comes to bodily traits and environment plays more of a role when it comes to things that humans have agency over—for things relating to the mind (Condit and Shen, 2011). “… people seem to deploy elements of fatalism or determinism into their worldviews or life goals when they suit particular ends, either in ways that are thought to ‘explain’ why other groups are the way they are or in ways that lessen their own sense of personal responsibility (Condit, 2011)” (Alexander, 2017: 19).

So, behavioral geneticists must be silenced, right? Bubela and Caufield (2004: 1402) write:

Our data may also indicate a more subtle form of media hype, in terms of what research newspapers choose to cover. Behavioural genetics and neurogenetics were the subject of 16% of the newspaper articles. A search of PubMed on May 30, 2003, with the term “genetics” yielded 1 175 855 hits, and searches with the terms “behavioural genetics” and “neurogenetics” yielded a total of 3587 hits (less than 1% of the hits for “genetics”). 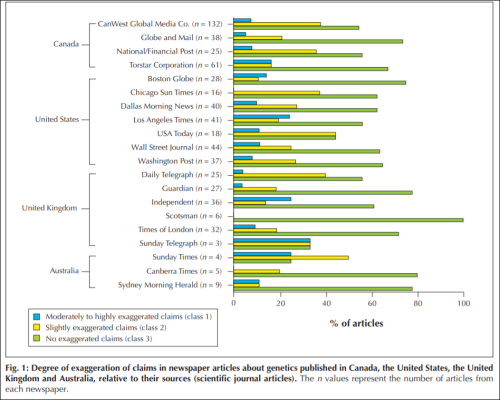 So Bubela and Caufield (2004) found that 11 percent of the articles they looked at had moderately to highly exaggerated claims, while 26 percent were slightly exaggerated. Behavioral genetic/neurogenetic stories comprised 16 percent of the articles they found, while one percent of all academic press articles were on genetics, which “might help explain why the reader gains the impression that much of genetics research is directed towards explaining human behavior; such copy makes newsworthy stories for obvious reasons” (Alexander, 2017: 17-18). Behavioral genetics research is indeed silenced! 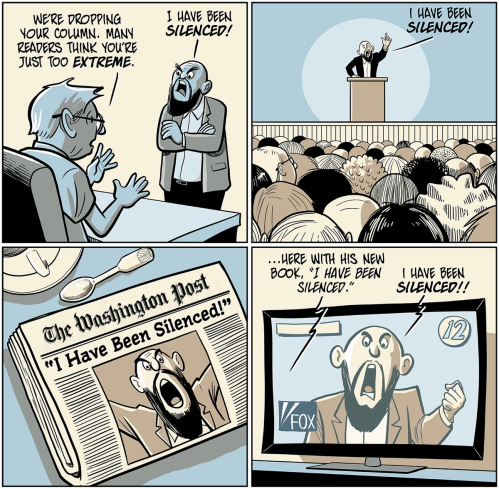 The public perception of genetics seems to line-up with that of genetics researchers in some ways but not in others. The public at large is bombarded with numerous messages per day, especially in the TV programs they watch (inundated with ad after ad). Certain researchers claim that ‘free inquiry’ into race and IQ is being hushed. To Cofnas (2019) I would say, “In virtue of what is it ‘free inquiry’ that we should study how a group handles an inherently biased test?” To Carl (2018) I would say, “What about the harm done assuming that the hereditarian hypothesis is true, that IQ tests test intelligence, and the funneling of minority children into EMR classes?” And to Meisenberg (2019) I would say “The answer to the question “Should research into cognitive differences be forbidden?” should be “Yes, they should be forbidden and banned since no good can come from a test that was biased from its very beginnings.” There is no ‘good’ that can come from using inherently biased tests, which is why the hereditarian-environmentalist debate on IQ is useless.

It is due to newspapers and other media outlets that people hold the beliefs on genetics they do. Behavioral genetics studies are overrepresented in newspapers; IQ is a subfield of behavioral genetics. Is contemporary research ignored in the mainstream press? Not at all. Recent articles on the social stratification of Britain have been in the mainstream press—so what are Cofnas, Carl, and Meisenberg complaining about? It seems it just stems from a persecution complex; to be seen as the new ‘Galileo’ who, in the face of oppression told the truth that others did not want to hear so they attempted to silence him.

Well that’s not what is going on here, as behavioral genetic studies are constantly pushed in the mainstream press; the complaining from the aforementioned authors means nothing; look to the newspapers and the public’s perception of genes to see that the claims from the authors are false.

By RaceRealist in HBD on January 12, 2020.
← An Argument for Banning IQ Tests Genes and Disease: Reductionism and Knockouts →