Origins and the Relationship between West Africans and Hunter-Gatherer Populations

(1/22/20 Edit: Khoi-san populations are found to diverge around 200k in light of the Ballito results and their own in context of the modern Khoi-San.)

Many casual members of HBD may not be completely aware of the population history West Africans and hunter-gathers like Pygmies beyond, say, the Bantu Migration.

Those who frequent articles by population genetics bloggers such as Dienekes or Razib Khan ought to be aware of how, in the sense of Macro races, the two clusters are distinct despite their relatively close association in a human cladistic sense to the confusion of others.

Fortunately enough, two recent finds in both genes and fossils this year not only paint the history of these two groups but also humanity as a whole, with the evolutionary timeline of Sapiens being pushed back to 300k, possibly further according to Chris Springer.

Hublin–one of the study’s coauthors–notes that between 330,000 and 300,000 years ago, the Sahara was green and animals could range freely across it.

While the Moroccan fossils do look like modern H sapiens, they also still look a lot like pre-sapiens, and the matter is still up for debate. Paleoanthropologist Chris Stringer suggests that we should consider all of our ancestors after the Neanderthals split off to be Homo sapiens, which would make our species 500,000 years old. Others would undoubtedly prefer to use a more recent date, arguing that the physical and cultural differences between 500,000 year old humans and today’s people are too large to consider them one species.

(The morphological characteristics of these hominids will come into play latter.)

Taking in this information in, we now ought to have a better context to place the divergence of HG populations and the rest of mankind (including West Africans) being more than 260,000 years ago.
[Edit– Razib has recently posted a short piece recalling expert criticism  on the reported date, suggesting that it is an overestimate. While quite possible, as he compares it to claims of a 25k split between European and NE asians and no neanderthal admixture in Europeans. With that said, he has also alludes to a similar suggestion on African lineages that I’ve outlined here. If this is the case, then why do they range so close to Modern West Africans? The reason, for the most part, being that this finding technically refers to it’s ancient primary cluster and not it’s modern composition as a whole.]

So in terms of proportions, 30% of the composition of West African people contain the human ancestors of the Ballito Boy, a specimen believed in turn to represent the ancestors of modern Khoisan people without the genetic admixture of either Bantu or East African Pastoralists. (Which this study finds to range from 9% to 22% in all modern Khoisan Groups).

[*Edit- When I say HG’s people association with West Africans, I’m referring to the relative position the two populations have compared the actual East African cluster exemplified the most by Nilotic people, not “Horners”. I realized this confusion when I look at genetic distance test and found Bushmen populations ranking closest to Ethiopians, this is probably just a result of their admixture with Ethiopians as later studies \accounted for the confound and gave more accurate results, West African’s closest cluster being both Nilotics and Ethiopians with Pygmies and San clustering closer than before, though Mbuti are rather intermediate with San than sharing a branch.

This seems to dampen earlier but plausible ideas suggestion of highland Ethiopians having a San-like African profile explain their affinity to each other, but this helps illustrate the nature of the cline in affinity of Native African clusters as Razib covered later that year both between each other and relative to non African populations. Here, we see that the San have closer affinities to West Africans than to Nilotics, though the pygmies groups having an odd relationship. Not only are Biaka people closer to West Africans than Mbuti are, but in general are closer to West Africans than to Mbuti. This is likely connected to these findings.

The findings also illustrate that oddly,  next to my knowledge at least, how though the San and Mbuti share similarly deep splits from non-africans, both of their smallest distances are with the Biaka than with each other despite the Biaka being closest to West Africans who are as distant as the Mbuti are to the San. Clearly imagining pygmies as merely as a cline between San and Bantus doesn’t work without considering a either considering them their own cluster altogether or to isolation. I’m considering the former idea for the most part.

Mainly because Mbuti are the smallest Pygmies, with height in that region being correlated with Pygmy ancestry versus Bantu, and Biaka pygmies have been shown to be only 18.5% to 30% “pygmy”, if assuming Mbutis are pure and Bantus are the outside group. Though the latter point explains the overall association they have with West Africans, there is still the remote position of the Mbuti. According to Cavalli Sforza, the San and Bushmen don’t necessarily share a particularly close relationship but both their lifestyles and apparent divergence from Bantus makes the idea rather convincing.

Based on the new study, which is though scant on including pygmies, comparing Mbuti dates to San shows similar dates to what was estimated at the high range of the previous 90k-195k split, if not a little higher. This is also consistent with the pygmies (in pure form) being intermediate between West African ancestors and San in the 1994 study and the new date for the Khoi-san. Their more or less genetic isolation may’ve played a role as well in their similar position with other African due to limited geneflow compared to the Khoisan and Biaka being connected through the Bantu Expansion, undermining the affinity Khoisan and Mbuti have through common ancestry. Basically similar to the relationship of Sardinians and mainland Italians which reflects a similar distance relationship with. ]

Now, the first thought crime most are pondering at this point is whether or not the Khoisan are fully human in the context of genetics and recent anthropology? John Hawks  already discussed the position of the ancient moroccans in our evolutionary tree and expresses the authors’ comments on how, despite their archaic features restrain them from being clearly modern, they and similar finds play the role as the founding lineage to contribute to modern Sapiens.

In Hublin and colleagues’ “pan-African” hypothesis, every African fossil that had parted ways with Neanderthals is part of a single lineage, a stem population for modern humans. They connect the evolution of these early H. sapiens people to a new form of technology, the Middle Stone Age, which was found in various regions of Africa by 300,000 years ago.

So how many other archaic groups were in Africa? Under the Hublin model, there may have been none. Every fossil sharing some modern human traits may have a place within the “pan-African” evolutionary pattern. These were not river channels flowing into the desert, every channel was part of the mainstream.

But there may be a problem. Geneticists think there were others.

To which he alludes to Iwo Eleru findings, found to be closest to Early AMH (120k levant)

Now, as for cranial representatives that the Ballito Boy likely is associated with, there has been indeed quite a few earlier skulls fitting the profile that were classed separate of more archaic types of similar geography like Florisbad, and thus would be classed away from the Moroccans as well.

An example being this rather interesting analysis of the Border Cave skull (which I believe is 50k, at a site which bushman-like tools dated at 46k).

When all (six rather than just three) discriminants are
considered, Border Cave in fact lies closest to the Hottentot
centroid and is contained within the .05 limits of this distribution.
The fossil also approaches the Venda and Bushman male
centroids but falls beyond the .05 limits of these groups. This
is new information, not principally because of the Hottentot
identification, which is dubious, but because Border Cave is
shown emphatically to be well within the range of modern
African variation for the measurements used. The cranium is
heavily constructed, but it is hardly archaic in the fashion of
Florisbad or Broken Hill. 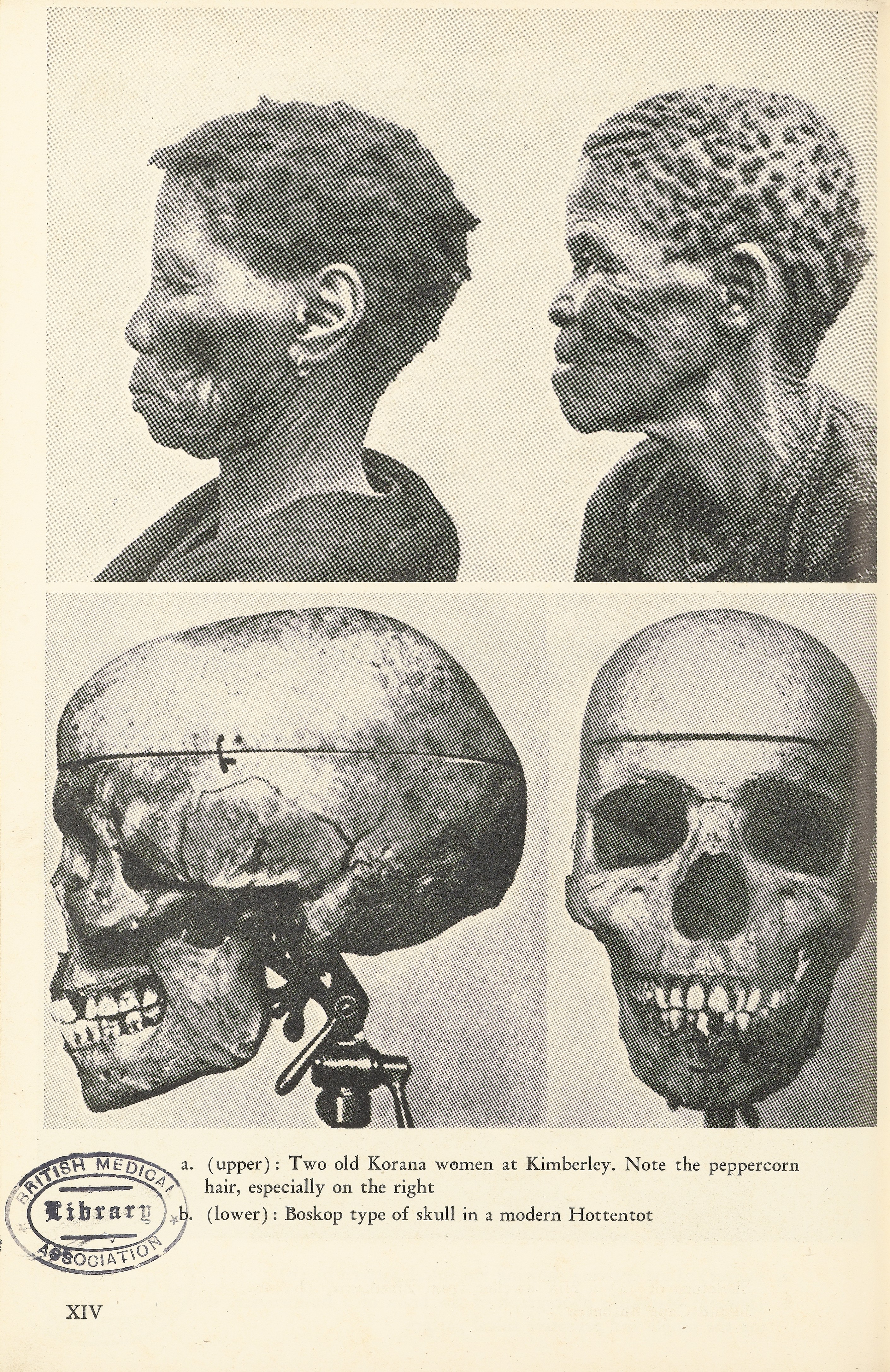 And here’s the best primary reference of a “bushman skull” I could find to display it’s similarities and differences with more admixed Pastoralists. One listed trait that’s notable is the less prominent occipital protrusion of the Bushman skull despite being measured as more dolichocephalic, probably due to a narrower relative breadth but that cannot be seen here.

However the only one I know of that is linked with Khoisan with modern research , is the similar Fish Hoek specimen.

Humanitec-Anatomy of an intellectual triad

In comparison to Jebel Irhoud 1

To summarize, therefore, the Pleistocene skulls from across Africa tend to be broad,
long, with a broad face and broad, short orbits.
By contrast, the skulls of the Khoisan (“Bushman”) population are relatively short,
low, broad, narrow, with a comparatively intermediate nose.
Pygmies are characterized by great variability, but they usually have small-sized
round skulls, and a balanced face. Their degree of dispersion, however, contradicts the findings of other studies, which have detected a strong homogeneity among Pygmy populations, even if these support the hypothesis that the typical features of these populations, including their short stature, took place after their geographical separation through convergent evolution. As is suggested by other more recent studies (Ramírez Rossi y Sardi, 2010; Anagnostou, 2010; Vigilant, 1989).
The Bantu-speaking populations are mostly at the center of the graph, which rep-
resents a common morphological tendency, but with a strong variability, whether they come from Southern, Eastern or Central Africa. This supports the idea of a common, more recent ancestor than that for the Pygmy and Khoisan groups, as well as a similar way of life founded on cattle breeding and farming, independent of their surrounding environment.

The Late Peopling of Africa According to Craniometric Data. A Comparison of Genetic and Linguistic Models

For context, the specimen in the sample that exemplifies the traits associated with the Pleistocene group the most would be the Herto Skull, which is comparatively closer to modern humans than the Jebel Irhoud findings.

So despite their divergence being closer to the age of more archaic specimens, why do their likely less admixed ancestors and modern populations contrast clearly in phenotypical traits? This would, by my amateur speculation, leave two options. Either gracilization took place in convergence with other populations or a more plausible route that the archaeological finds don’t precisely place the specimen’s actually divergence, thus the more archaic forms likely have older splits than what their fossilized age suggest and the clear traits of “Modern human” phenotype possibly being older as well in that respect.