Home » IQ » The Malleability of IQ

The Malleability of IQ

1843 Magazine published an article back in July titled The Curse of Genius, stating that “Within a few points either way, IQ is fixed throughout your life …” How true is this claim? How much is “a few points”? Would it account for any substantial increase or decrease? A few studies do look at IQ scores in one sample longitudinally. So, if this is the case, then IQ is not “like height”, as most hereditarians claim—it being “like height” since height is “stable” at adulthood (like IQ) and only certain events can decrease height (like IQ). But these claims fail.

IQ is, supposedly, a stable trait—that is, like height, at a certain age, it does not change. (Other than sufficient life events, such as having a bad back injury that causes one to slouch over, causing a decrease in height, or getting a traumatic brain injury—though that does not always decrease IQ scores). IQ tests supposedly measure a stable biological trait—“g” or general intelligence (which is built into the test, see Richardson, 2002 and see Schonemann’s papers for refutations on Jensen’s and Spearman’s “g“).

IQ levels are expected to stick to people like their blood group or their height. But imagine a measure of a real, stable bodily function of an individual that is different at different times. You’d probably think what a strange kind of measure. IQ is just such a measure. (Richardson, 2017: 102)

Neuroscientist Allyson Mackey’s team, for example, found “that after just eight weeks of playing these games the kids showed a pretty big IQ change – an improvement of about 30% or about 10 points in IQ.” Looking at a sample of 7-9 year olds, Mackey et al (2011) recruited children from low SES backgrounds to participate in cognitive training programs for an hour a day, 2 days a week. They predicted that children from a lower SES would benefit more from such cognitive/environmental enrichment (indeed, think of the differences between lower and middle SES people).

Mackey et al (2011) tested the children on their processing speed (PS), working memory (WM), and fluid reasoning (FR). Assessing FR, they used a matrix reasoning task with two versions (for the retest after the 8 week training). For PS, they used a cross-out test where  “one must rapidly identify and put a line through each instance of a specific symbol in a row of similar symbols” (Mackey et al, 2011: 584). While the coding “is a timed test in which one must rapidly translate digits into symbols by identifying the corresponding symbol for a digit provided in a legend” (ibid.) which is a part of the WISC IV. Working memory was assessed through digit and spatial span tests from the Wechsler Memory Scale.

The kinds of games they used were computerized and non-computerized (like using a Nintendo DS). Mackey et al (2011: 585) write:

Both programs incorporated a mix of commercially available computerized and non-computerized games, as well as a mix of games that were played individually or in small groups. Games selected for reasoning training demanded the joint consideration of several task rules, relations, or steps required to solve a problem. Games selected for speed training involved rapid visual processing and rapid motor responding based on simple task rules.

So at the end of the 8-week program, cognitive abilities increased in both groups. For the children in the reasoning training, they solved an average of 4.5 more matrices than their previous try. Mackey et al (585-586) write:

Before training, children in the reasoning group had an average score of 96.3 points on the TONI, which is normed with a mean of 100 and a standard deviation of 15. After training, they had an average score of 106.2 points. This gain of 9.9 points brought the reasoning ability of the group from below average for their age. [But such gains were not significant on the test of nonverbal intelligence, showing an increase of 3.5 points.]

One of the biggest surprises was that 4 out of the 20 children in the reasoning training showed an increase of over 20 points. This, of course, refutes the claim that such “ability” is “fixed”, as hereditarians have claimed. Mackey et al (2011: 587) writes that “the very existence and widespread use of IQ tests rests on the assumption that tests of FR measure an individual’s innate capacity to learn.” This, quite obviously, is a false claim. (This claim comes from Cattell, no less.) This buttresses the claim that IQ tests are, of course, experience dependent.

This study shows that IQ is not malleable and that exposure to certain cultural tools leads to increases in test scores, as hypothesized (Richardson, 2002, 2017).

results from different types of approaches are converging on a conclusion that practice or retest contributions to change in several cognitive abilities appear to be nearly the same magnitude in healthy adults between about 20 and 80 years of age. These findings imply that age comparisons of longitudinal change are not confounded with differences in the influences of retest and maturational components of change, and that measures of longitudinal change may be underestimates of the maturational component of change at all ages.

Moreno et al (2011) show that after 20 days of computerized training, children in the music group showed enhanced scores on a measure of verbal ability—90 percent of the sample showed the same improvement. They further write that “the fact that only one of the groups showed a positive correlation between brain plasticity (P2) and verbal IQ changes suggests a link between the specific training and the verbal IQ outcome, rather than improvement due to repeated testing.”

Schellenberg (2004) describes how there was an advertisement looking for 6 year olds to enroll them in art lessons. There were 112 children enrolled into four groups: two groups received music lessons for a year, on either a standard keyboard or they had Kodaly voice training while the other two groups received either drama training or no training at all. Schellenberg (2004: 3) writes that “Children in the control groups had average
increases in IQ of 4.3 points (SD = 7.3), whereas the music groups had increases of 7.0 points (SD = 8.6).” So, compared to either drama training or no training at all, the children in the music training gained 2.7 IQ points more. 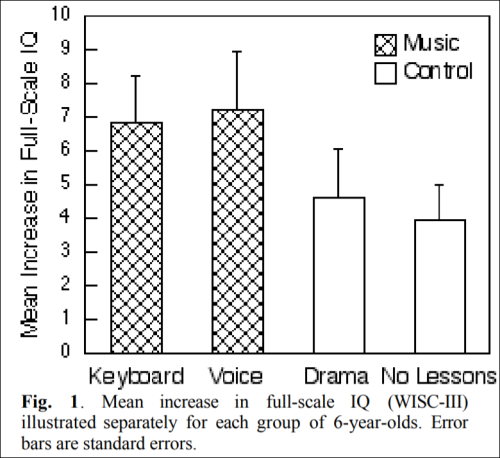 The wide range of abilities in our sample was confirmed as follows: FSIQ ranged from 77 to 135 at time 1 and from 87 to 143 at time 2, with averages of 112 and 113 at times 1 and 2, respectively, and a tight correlation across testing points (r 5 0.79; P , 0.001). Our interest was in the considerable variation observed between testing points at the individual level, which ranged from 220 to 123 for VIQ, 218 to 117 for PIQ and 218 to 121 for FSIQ. Even if the extreme values of the published 90% confidence intervals are used on both occasions, 39% of the sample showed a clear change in VIQ, 21% in PIQ and 33% in FSIQ. In terms of the overall distribution, 21% of our sample showed a shift of at least one population standard deviation (15) in the VIQ measure, and 18% in the PIQ measure. [Also see The Guardian article on this paper.[

Richardson (2017: 102) writes “Carol Sigelman and Elizabeth Rider reported the IQs of one group of children tested at regular intervals between the ages of two years and seventeen years. The average difference between a child’s highest and lowest scores was 28.5 points, with almost one-third showing changes of more than 30 points (mean IQ is 100). This is sufficient to move an individual from the bottom to the top 10 percent or vice versa.” [See also the page in Sigelman and Rider, 2011.]

Mortensen et al (2003) show that IQ remains stable in mid- to young adulthood in low birthweight samples. Schwartz et al (1975: 693) write that “Individual variations in patterns of IQ changes (including no changes over time) appeared to be related to overall level of adjustment and integration and, as such, represent a sensitive barometer of coping responses. Thus, it is difficult to accept the notion of IQ as a stable, constant characteristic of the individual that, once measured, determines cognitive functioning for any age level for any test.”

There is even instability in IQ seen in high SES Guatemalans born between 1941-1953 (Mansukoski et al, 2019). Mansukoski et al’s (2019) analysis “highlight[s] the complicated nature of measuring and interpreting IQ at different ages, and the many factors that can introduce variation in the results. Large variation in the pre-adult test scores seems to be more of a norm than a one-off event.” Possible reasons for the change could be due to “adverse life events, larger than expected deviations of individual developmental level at the time of the testing and differences between the testing instruments” (Mansukoski et al, 2019). They also found that “IQ scores did not significantly correlate with age, implying there is no straightforward developmental cause behind the findings“, how weird…

Summarizing such studies that show an increase in IQ scores in children and teenagers, Richardson (2017: 103) writes:

Such results suggest that we have no right to pin  such individual differences on biology without the obvious, but impossible, experiment. That would entail swapping the circumstances of upper-and lower-class newborns—parents’ inherited wealth, personalities, stresses of poverty, social self-perception, and so on—and following them up, not just over years or decades, but also  over generations (remembering the effects of maternal stress on children, mentioned above). And it would require unrigged tests based on proper cognitive theory.

In sum, the claim that IQ is stable at a certain age like another physical trait is clearly false. Numerous interventions and reasons can increase or decrease one’s IQ score. The results discussed in this article show that familiarity to certain types of cultural tools increases one’s score (like in the low SES group tested in Mackey et al, 2011). Although the n is low (which I know is one of the first things I will hear), I’m not worried about that. What I am worried about is the individual change in IQ at certain ages, and they show that. So the results here show support for Richardson’s (2002) thesis that “IQ scores might be more an index of individuals’ distance from the cultural tools making up the test than performance on a singular strength variable” (Richardson, 2012).

IQ is not stable; IQ is malleable, whether through exposure to certain cultural/class tools or through certain aspects that one is exposed to that are more likely to be included in certain classes over others.  Indeed, this lends credence to Castles’ (2013) claim that “Intelligence is in fact a cultural construct, specific to a certain time and place.“