The Harmattan season is a little known feature of the climatic characteristics of the West African subcontinent. Similarly to a temperate climate winter, it occurs between November and March,  5 months during which the region experiences dry, hazy, and colder conditions due to Saharan dust particles brought by the Harmattan trade wind.

Although the Harmattan season is sometimes referred to as a West African winter with temperature commonly dropping to a low 7°C (45°F) during the night and in the morning, typical tropical temperatures ranging from 25°C to 35°C (77°F – 95°C) are experienced during the afternoon. The humidity rate is below 15% and the region experiences no rainfall during the season. More than the drought, the colder temperature and occasional dust storms and wildfires, the dusty Harmattan haze is what makes the West African winter challenging by significantly reducing visibility and causing several health problems such as asthma, meningitis, skin and eye conditions. From an evolutionary standpoint, it is possible that the Harmattan season has caused various anatomical adaptations affecting brain characteristics. 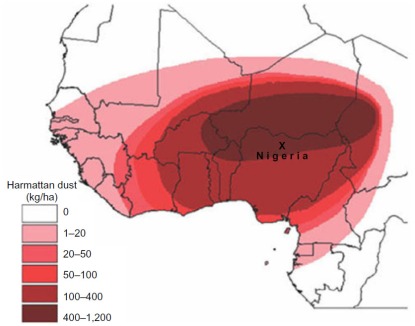 Despite the common hereditarian claim that Sub-Saharan Africans average smaller cranial capacities than Eurasians due to the warmer climates of tropical Africa, the few studies that I’ve come across regarding West Africa paint a significantly different picture. In a 2011 sample of North-Eastern Nigerian adults likely of Kanuri ethnicity, the reported average cranial capacity was 1424cc for males and 1331cc for females, which makes a total average of 1378cc. In a 2013 sample of 527 Igbos aged 14-20 from Anambra State (Southeastern Nigeria), the reported cranial capacities were 1411cc for males and 1443cc for females and a combined average of 1427cc. In another study of Southeastern Nigerians (year 2011),  the reported values were closer to those usually claimed with an average of 1310cc among Edos, 1273cc among Igbos and 1256cc among Urhobos.

Although these are only a few studies on West African cranial characteristics, they at least have the merit of being recent (less than 10 years old) and drawn from actual measurements on living persons contrary to Beals et al.’s 1984 reference study in which the West African values are inferred from simplistic climatic variables in the absence of actual skulls from the region. I have often shown these high cranial capacity West African samples as a refutation of the cold winter theory of brain size differences.  And whereas hereditarian debaters have commonly dismissed them as meaningless exceptions to the rule, there is no scientific rule with unexplainable exceptions.

Harmattan haze in the Ghanaian countryside

In fact, judging from the competing and more generally accepted theory that brain size and eyeballs grow in adaptation to low light environments, the high cranial capacity, especially in Northern Nigerian samples, makes perfect sense if seen as an adaptation to the low visibility caused by the Harmattan haze from November to March. Unfortunately I wasn’t able to find any data on West African eye characteristics, I can only anecdotally mention a higher frequency of epicanthic fold among West Africans relative to other non-Mongoloid populations. I acknowledge that this post is somewhat speculative and based on poor data. Nevertheless, I write it as a warning to all the bloggers and “scholars” making up theories and inferences based on a poor understanding of the complexity of the world’s current and past climatic conditions. 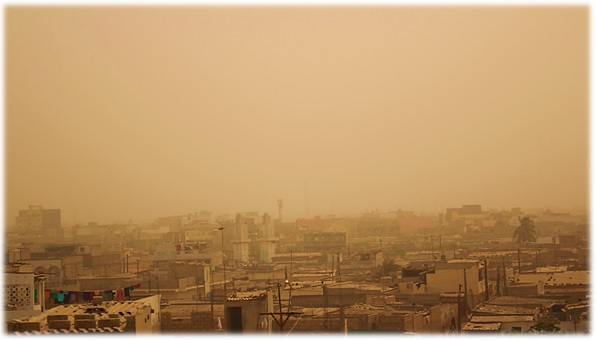 Dakar, Senegal under the Harmattan Haze.