Home » Nutrition » Science Daily: Mom’s Exposure to BPA During Pregnancy Can Put Her Baby on Course to Obesity

Science Daily: Mom’s Exposure to BPA During Pregnancy Can Put Her Baby on Course to Obesity

Science Daily came out with an article today that exposure to BPA invitro for babies is correlated with obesity at age 7. 94 percent of the women tested had detectable levels of BPA. BPA is also linked with early onset puberty, which I will also speak on later in this article as it has implications for one of my theories.

I briefly touched on BPA in my article What’s the Cause of the Cucking of Europe? where I said:

I advise all of you (women included, there are many deleterious effects of BPA on the mother as well as the baby prenatally), to discontinue use of plastics with BPA in them.

The paper, which was just released on the 17th, called Bisphenol A and Adiposity in an Inner-City Birth Cohort, carried out tested BPA in three differing subjects: 375 babies invitro, (3rd trimester) children aged 3 (n=408) and aged 5 (n=518) (Hoepner, et al, 2016). They measured the children’s bodies as well as measuring body fat levels with bioelectrical impedance scales.** Prenatal urinary BPA was positively associated with waist circumference as well as fat mass index, which was sex-specific. When analyzed separately, it was found that there were no associated outcomes in body fat for boys (however it does have an effect on testosterone), but there was for girls (this has to do with early onset puberty as well). They found that after controlling for SES and other environmental factors, they discovered that there was a positive correlation with fat mass index – a measure of body fat mass adjusted for height, body fat percentage and waist circumference. The researchers say that since there was no correlation between BPA and increased obesity, that prenatal exposure to BPA indicates greater vulnerability in that period.

The researchers then conclude that BPA exposure invitro “may be an important underlying factor in the obesity epidemic” and that “Endocrine disrupting chemicals like BPA may alter the baby’s metabolism and how fat cells are formed early in life.”

If true, this has huge implications for the way we look at the obesity epidemic in this country. Who are the most likely to be obese? “Hispanics” and blacks (Ogden et al, 2014).

Since BPA is correlated with adiposity in children and black girls have earlier menarche DUE to there being a higher chance of black girls being overweight in comparison to white girls, BPA is yet another piece to the puzzle of this phenomena, along with, of course, evolution. Ingestion of BPA is an environmental factor, however, with these changes in body chemistry in the children invitro due to increased BPA consumption by the pregnant mothers, it leads to one cause that can be prevented from further occurring due to our new knowledge.

The study was carried out on a cohort from NYC. In 2010 in NYC, the city was: 44 percent white, 25.5 percent black, 12.7 percent Asian with the rest being filled out by ‘Hispanics’ (not a racial category) and mixed-race people. Even after they matched for SES and other environmental factors, these differences persisted. However, this study was only carried out on those women who self-identified as either Dominican (basically African) and black. To quote the researchers:

Women were included if they self-identified as either African American or Dominican and had resided in Northern Manhattan or the South Bronx for at least 1 year before pregnancy. Exclusion criteria included mother’s report of: cigarette smoking or use of other tobacco products during pregnancy, illicit drug use, diabetes, hypertension, known HIV, or a first prenatal visit after the 20th week of gestation.

So, we have a full sample of Caribbean Africans and African Americans in this study. What else can we learn about those two populations and their consumption of things with BPA in them? 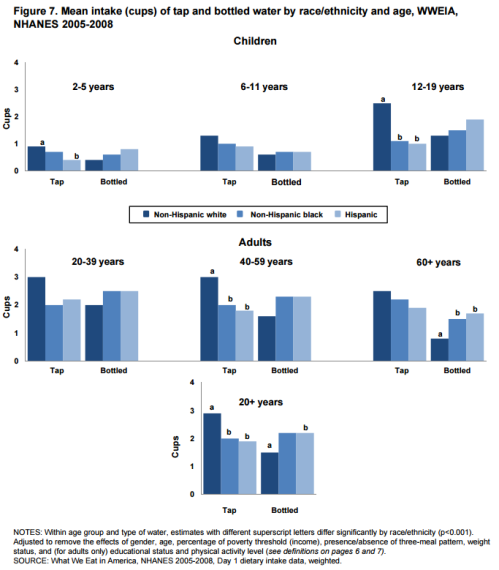 The above Figure (7) is taken from the U.S. Department of Agriculture and the Food Surveys Research Group study on differences in drinking tap and bottled water.in different populations in the country. As you can see in this figure (what is notable is the ages 12-19 and 20 to 60 in the table), whites at all age groups drink more tap water. Blacks and ‘Hispanics’ were pretty much even in consumption of bottled water. However, Mexican American girls, like black girls, are also entering puberty earlier. Since both populations have a substantial percentage of them overweight and obese (factor for serum leptin production which then causes early onset puberty), this again shows a strong correlation between body fat gain and early onset puberty. Moreover, this also shows that both Dominican and black populations consume more bottled water than do white populations, both populations are more likely to be obese or overweight (even after controlling for SES) which causes leptin production earlier causing periods to happen much sooner than in populations who drink less bottled water and use other products with BPA in them. .

Going back to preeclampsia, it is a condition that pregnant women develop that’s characterized by hypertension (high blood pressure) and protein in the urine. It’s known that black women suffer from it the most. More interestingly, over the past ten years, rates of preeclampsia have been increasing in the black female population. As the researchers note in the article, BPA is correlated with preeclampsia. Blacks have a higher rate and chance of being diagnosed with hypertension as well. All of these differing variables coalesce into our current obesity epidemic. With blacks and “Hispanics” being more likely to be overweight/obese drink more bottled water, have a higher risk for hypertension, higher risk for preeclampsia and having earlier menarche, these help explain, in part, racial/ethnic differences in obesity.

These differences can be attributed to consumption of bottled water, i.e., consuming things with made with and packaged in plastic as well as canned foods. From my experience with Dominican and black New Yorkers, they tend to have horrible lifestyles, tend to drink tons of bottled water and also tend to be overweight or obese at a higher rate in comparison to the general population. This leads to biologic factors changing (i.e., earlier menarche in younger girls) in these young girls, leading to devastating effects on their body chemistry.

This study, yet again, proves another underlying factor for obesity in certain populations in the country. And what do you know? It’s the populations that already have the highest rate of obesity in the country. When it becomes definitive that BPA consumption by pregnant mothers does lead to underlying factors in obesity. To quote the researchers: “Endocrine disrupting chemicals like BPA may alter the baby’s metabolism and how fat cells are formed early in life.” This will be HUGE for our understanding of underlying causes to obesity! Moreover, if (when) this is fully corroborated, it can then be said that by mothers exposing their children in the womb to excess levels of BPA, there is a chance that they are “giving their own choice to make their children have a higher chance of being obese, as they know the dangers of BPA consumption during pregnancy and all of the negative variables associated with it.”

This is an extremely interesting and important study for our understanding of obesity. Since BPA consumption invitro is correlated with higher fat mass index in girls at age 7, and since those girls who tend to be more overweight and obese than other populations, we can then say that BPA has a hand in obesity in children, which then causes serum leptin to be released, causing way menarche in these populations. An increase in sexual maturation has been linked to the obesity epidemic, which began around 60 years ago. The cause of this is due to the demonization of the fat macro and carbohydrates, all the while it was reversed. This destroyed insulin sensitivity for many Americans, leading to a huge majority of our health problems today.

In conclusion, underlying factors for obesity keep appearing. Due to racial/ethnic differences in bottled water consumption (one of the most common BPA products in households), which the effects of BPA may alter how fat cells are formed in early life, this accounts for, in part, excess adiposity in differing populations. These underlying factors could help show where some of these racial/ethnic differences in obesity come from. Since the two populations in the study (black American and Dominican) both have high levels of adiposity, both drink a lot of bottled water and both have earlier menarche than do whites (who drink LESS bottled water), this shows that some (a lot?) of the variation in obesity between ethnic/racial groupings can be explained by these underlying factors.

** I have one problem with this study. They assessed fat mass index with bioelectrical impedance.The machine sends a light electrical current through the body and measures the degree of resistance to the flow of the current, which body fat can then be estimated. Problems with measuring body fat this way are as follows: it depends on how hydrated you are, whether you exercised that day, when you last ate, even whether your feet are calloused. Most importantly, they vary depending on the machine as well. Two differing machines will give two differing estimates. This is my only problem with the study. I would like if, in a follow-up study, they would use the DXA scan or hydrostatic weighing. These two techniques would be much better than using bioelectrical impedance, as the variables that prevent bioelectrical impedance from being a good way to measure body fat don’t exist with the DXA scan or hydrostatic weighing.

By RaceRealist in Nutrition, Obesity, Race Realism on May 19, 2016.
← More g Denialism and more Gould Refuting “Philosophers of Science” and Race/IQ →