Home » Crime » Why Testosterone Does Not Cause Crime

Why Testosterone Does Not Cause Crime

Edit: (The correlation between aggression and testosterone isn’t .14 as Book et al (2001) state; the true correlation is .08 (Archer, Graham-Kevan and Davies, 2005) So it’s even lower than I thought. This is one of the many reasons why testosterone does not cause crime. It’s just feminist bullshit and fear mongering from people who do not understand the hormone and what it does in the body. The misconceptions come from Rushton’s r/K selection bullshit which has been summarily refuted.)

Recently, I’ve written at length on racial differences in testosterone and how the correlation between testosterone and physical aggression is .14. Pitifully low to account for the cause of crime and any overall differences in racial crime (that will be touched on at length in the future). Tonight I will show, yet again, why testosterone does not cause crime by looking at what times most crimes are committed by both adults and children under the age of 18. This will definitively put the ‘testosterone causes crime’ myth to bed for good. 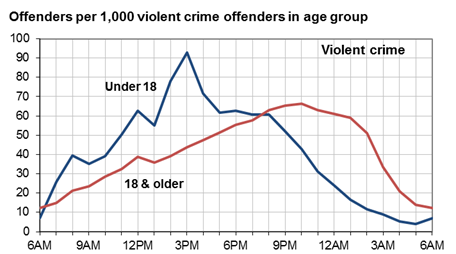 Above is a graph from the Office of Juvenile Justice and Delinquency Prevention which shows the time of day that most crimes are committed. Notice how crime goes up as the time of day goes on and since kids are at school, they’re more likely to fight. This then peaks at 3 pm when kids are getting out of school.

Now look at rates of crime for adults. At its peak of 10 pm, it’s vastly lower than that of people under the age of 18, which is important to keep in mind. You can see how at 8 am that rates of crime are low for adults and high for kids, right when they would be entering school so there would be a lot of other kids around and the chance for violence goes up. Keep the times of 8 am (kids when they enter school), 12 pm (when most kids go on lunch) and 3 pm (when most kids get out of school) along with the hours of 12 pm to 8 pm for adults (when 74 percent of crimes are committed by adults).

So since testosterone varies by day and levels are highest at 8 am and lowest at 8 pm (Brambilla et al, 2009; however testing men aged 45 years of age and older is fine before 2 pm due to a blunted circadian rhythm; Long, Nguyen, and Stevermer, 2015), then how could testosterone account for why men commit most of their crimes at night and why the crime that children commit spikes when they go to school, go to lunch and get out of school? The answer is that it doesn’t because testosterone does not cause crime. What testosterone does cause, however, are feelings of confidence and dominance, which does not—surprisingly—lead to increased aggression and assault on others (Booth et al, 2006).

What testosterone does cause, however, is social dominance and success, not physical aggression and maladjustment (Shcaal et al, 1996). The effects of environment are also more notable on testosterone than are genetics at 5 months of age (Carmaschi et al, 2010). Furthermore, aggressive behavior is first noticed in infancy and reaches its peak before school age (Tremblay et al, 2004; Cote et al, 2006). Though testosterone does seem to have an effect on aggression in preschool boys, however genetic and environmental causality has not been established (Sanchez-Martin et al, 2000).

Nevertheless, the meta-analyses I cited last week show that testosterone has an extremely low correlation of .14, so other factors must be at play. However, Sanchez-Martin et al (2000:778-779) also note that “Tremblay et al (1998) suggested that associations between testosterone titer and physical aggression are likely to be observed in contexts where such attack leads to social dominance. This may be true of the preschool boys in the present study. The data generated in the present study generally support Scerbo and Kolko (1994), who studied older children (7 to 14 years of age). They found a significant relationship between testosterone levels and aggression (as assessed by clinical staff).”

It’s interesting to note that in the case of Scerbo and Kolko (1994) that after controlling for age and size, testosterone correlated with aggression when rated by staff but not parents or teachers. ‘Staff’ refers to clinic staff at a facility where the children were assessed for hyperactivity disorders. Of course, the staff would rate higher levels of aggression compared to parents of teachers—people who are around the children every day—since they would want a higher chance for diagnosis for certain drugs to ‘cure’ the hyperactivity, but I digress. Testosterone does not induce aggression in children, but it does induce social dominance and confidence which does not lead to aggression (Rowe et al, 2004; Booth et al, 2006).

There was also little difference in testosterone between socially dominant prisoners and aggressive prisoners (Ehrenkraz, Bliss, and Sheard, 1974). Furthermore, the testosterone increase leading to pubertal development in boys is not associated with increased aggression (Tremblay et al, 1998; Booth et al, 2006: 171). Indeed, increased body size is a marker for physical aggression in children, and I doubt these children have high muscle mass so, I assume, they have high levels of body fat and thusly lower levels of testosterone than they would have if they were leaner. Yet another strike against the ‘testosterone causes crime/physical aggression’ hypothesis.

Indeed, this has some implications for the honor culture hypothesis of why low-income blacks have higher levels of testosterone than similarly aged blacks with some college (Mazur, 2016). The patterns for crime as shown by the OOJDP shows that crime rises as the day progresses from the morning until its peak at 3 pm for children and then sharply declines while for adults it peaks at 10 pm.

Testosterone does increase when a challenge is issued; when one man feels his reputation is threatened, the propensity for violence is increased, but this was most notably seen in Southern men (Cohen et al, 1996). So the same would be said for this ‘culture of honor’ found in low-income black neighborhoods, the so-called ‘code of the street’ as stated by Anderson (1994: 88): “Moreover, if a person is assaulted, it is important, not only in the eyes of his opponent but in the eyes of his “running buddies,” for him to avenge himself. Otherwise, he risks being “tried” (challenged) or “moved on” by any number of others. To maintain his honor, he must show he is not someone to be “messed with” or “dissed.””

This culture of honor is found all over the world, including Brazil where homicide can be explained by the need to maintain honor and can be understood by taking into account cultural factors; biological, psychological and socioeconomic factors do not explain murder in Northeast Brazil as well as honor and culture (de Souza et al, 2015). People in honor cultures also have a higher chance of self-harm (Osterman and Brown, 2011) as well as a higher chance of committing violence in school (Brown, Osterman, and Barnes, 2009).

Testosterone does not cause crime; it does not cause aggression. Increases in testosterone before, during and after events are a physiologic process to prime the body for competition. As cited above, dominant behavior does not necessarily lead to violence in most cases, which may be surprising for some. Indeed, honor and culture may explain a nice amount of the homicide and violence rate in the South. Since testosterone is highest at 8 am and lowest at 8 pm and the rates of crime committed by adults and children are vastly different than the diurnal variance in the day, then testosterone does not cause crime and its increase is not associated with crime, but social dominance and confidence which does not lead to crime.

Hopefully—if anyone still believes testosterone to be the boogeyman its made out to be—I’ve put those misconceptions to rest. Racial differences in testosterone cannot be the cause of racial differences in crime—because there is either no statistical difference in testosterone between the races or the difference is non-existent. Testosterone is clearly a beneficial hormone—as I have extensively documented. Misunderstandings of the hormone are abound—especially in the HBD sphere—only due to literally a few paragraphs in a book (Rushton, 1997) and one study that showed blacks have higher testosterone than whites which was the cause of their higher rates of prostate cancer (Ross et al, 1986). The study is hard to find so I had to buy access to it. I will cover this in the future, but I discovered that they assayed the subjects when it was convenient for them—between the hours of 10 am and 3 pm—which is unacceptable. You cannot gauge racial differences in testosterone from a small study (n=50) and a non-representative sample (college students). For these reasons, the study should be thrown in the trash—especially when formulating evolutionary hypotheses.

Testosterone is one of the most important hormones for vital functioning. By knowing how it is processed in the body and that there are no ‘genes for’ testosterone (‘low testosterone genes’ notwithstanding) along with how testosterone has a low relationship with physical aggression one should not be scared of having high levels, on the contrary, one should be scared of having low levels. I have once again proven my case that testosterone is not related to violence in showing the diurnal variation in testosterone levels in adults, as well as the time of day that crimes are committed by both adults and children. High testosterone means high confidence and high dominance—and those two traits have a lot to do with masculinity—which do not lead to violence.

I know why testosterone does not cause crime—because I have an understanding of the hormone, how its produced in the body and what its effects on the body are. The most important thing to note here, is that even if blacks had 15 percent higher testosterone than whites, it still wouldn’t explain higher rates of crime or disease such as prostate cancer. So those who try so hard to prove that blacks have higher levels of the hormone do so in vain, because even if they did it wouldn’t mean anything for any theories they may have. The myth of testosterone causing aggression and crime need to be put to bed for good.

By RaceRealist in Crime, Culture, HBD, Race Realism, Refutations, testosterone on June 18, 2017.
← Our View of ‘Intelligence’ Needs to Change The ENA Theory: On Testosterone and Aggressive Behavior by Race/Ethnicity →