Blacks are better sprinters and whites are better swimmers. Why is this? A whole slew of factors influence this—social, physiological, anatomic. However, there is a stereotype about blacks that has been repeated since I was a child: that blacks can’t swim. How true is this? If it is true, what explains it? It is my opinion that it is true, and that social, cultural, and anatomic and physiologic factors account for this. The same for whites and running. Black children drown at a rate of about 3 times higher than white children. About 70 percent of black children cannot swim, compared to 60 percent of “Hispanic” children and 40 percent of white children. Why is that? Well, one of the most telling answers why is anatomic. Irwin et al (2011) note in their study that blacks are more likely to be “aquaphobes”—having a fear of water—compared to whites.

Almost three years ago, I wrote White Men Can’t Jump? That’s OK, Black Men Can’t Swim. In the article, I explain how and why blacks have a harder time swimming than whites. One anatomic reason is their chest cavity. Compared to whites, blacks have a narrower chest cavity. They have denser, shallower chests. This is a burden while swimming, since those who have a wider chest can take longer strides with their arms while swimming. Blacks have denser bones than whites (Ettinger et al, 1997), Swimmers have lower bone density than non-swimmers (Gomez-Bruton et al, 2013), and so, high bone density is not conducive to swimming success, either.

The first black man to make the swim team for America in the Olympics was Anthony Ervin in 2000. (Funny story. In a class I took a few years ago, racial differences in sports came up. I brought up race differences in swimming. A black guy behind me said “My grandfather was the first to qualify for the Olympics.” I said “Yea? Your grandfather is Anthony Ervin?” He didn’t say anything, it seemed like he got mad at me for calling him out.) That it took this long for a black man to qualify for the US in swimming is telling, and anatomy and physiology, in my opinion, are how we can explain the observed disparity,

So, blacks have lower body fat (on average), and narrower chest cavities. These two things play a role in why blacks are not good swimmers. Yet another role-player, could be, the fact that black women don’t want their hair to get wet and so never taught their children how to swim, parental encouragement, to “swimming is something that white people do” (Wiltse, 2014). Who knows? Maybe in the coming years, blacks could match whites at swimming. Though, with what we know about anatomy and physiology of elite swimmers, this is highly unlikely. It’s like saying “Who knows? Maybe in the coming years, whites could match blacks at running.” Our knowledge of anatomy and physiology throws a wrench in claims like that.

The phenomenon of fast black sprinters and fast white swimmers is predictable through physics (Bejan, Jones, and Charles, 2010). The finalists of running competitions are continuously black, whereas in the swimming competitions they are continuously white. What accounts for this? Well, other than the factors discussed above, there is one more: center of mass.

It is well-known that different races have different anatomic measurements. Blacks have longer limbs than whites (Gerace et al, 1994; Wagner and Heyward, 2000) and longer legs and smaller muscle circumferences (e.g., calves, arms), then they have a higher center of mass than an individual of the same height. So since Asians and whites have long torsos (i.e., since they are endomorphic), they have a lower centers of mass. Asians have the tallest sitting heights, matched with people of the same height, and so we would expect them to be exceptional swimmers. However, since they are not as tall as whites, they do not set records. Blacks, on the other hand, have a lower sitting height when matched with someone of the same height—3 cm shorter. Whites’ sitting height was lower than Asians, but whites are taller so whites dominate swimming compared to Asians because of their average center of mass. See Table 3 from Bejan, Jones, and Charles (2010). 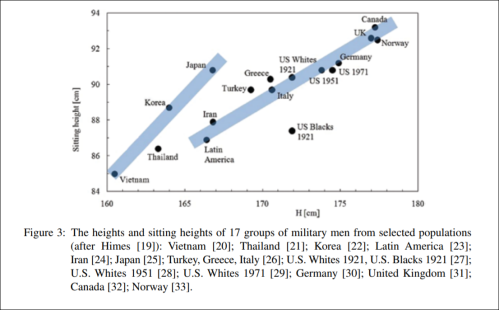 So for taller athletes, mass that falls from a higher altitude falls faster, down and forward; speed increases with larger physiques. So since blacks have larger physiques than whites, then, at the extremes of elite sports (running), their mass allows them to fall down forward, faster and since they have larger physiques, they are faster. So world records are set by athletes with different centers of mass: black athletes in running and white athletes in swimming.

Shifting away from physics, we will now discuss the cultural/social component. The fact that many blacks do not know how to swim became apparent after the Red River drownings of 2010 (Wiltse, 2014). Wiltse (2014) notes three reasons why blacks may be bad swimmers compared to whites: (1) white swimmers denied blacks access to pools; (2) cities provided few pools to black communities and the pools they did provide were small; and (3) the cities closed many public pools after desegregation occurred. White parents taught their children how to swim, but black parents hardly ever did. As this occurred as swimming became popular in American culture, this could be one reason why blacks aren’t as represented in swimming when compared to whites.

Wiltse’s (2014) argument is that past discrimination to blacks from whites when it came to swimming explains the drowning disparity between the races. Whites passed down their swimming knowledge, whereas blacks had little to no chance to pass theirs down—if they even knew how to swim, that is. This type of cultural transmission could explain most—if not all—of the disparity in drowning between the races. It is simple: to address the disparity, the claim that swimming is “what white people do” needs to be addressed. I would assume that this claim grew from the 60s and desegregation from when blacks were barred from swimming pools, as Wiltse (2014) notes. While the swimming and drowning gap can be closed, the elite sports (running and swimming) gap cannot be—as most of what drives the relationship between race and those sports are anatomic and physiologic in nature, combined with numerous other irreducible variables.

However, pointing to these types of cultural/social causes can be reversed. We can say that since white parents don’t teach their children how to sprint and thus they have not taught their children how to sprint for successive generations, then if white parents did just that then whites would begin to close the gap when it comes to sprinting. While I do not deny that we would have more black swimmers had these types of discriminatory acts had not occurred, it is ridiculous to claim that the two races can and will become equal if this were to occur. It’d be like saying that if we train this person from birth to become an elite sprinter then they would be. Though the right analogy would be that since there are fewer whites than blacks in elite running sports, then what explains the disparity is that they are not trained that way from pretty much conception. However this betrays the systems view of athleticism, and while there are necessary factors in regard to running success, the whole system must be looked at when assessing what makes an elite athlete.

In conclusion, there are many anatomic and physiologic reasons why blacks and whites differ in running and swimming sports. Anatomic differences, such as center of mass, explain the disparities in swimming and running. Blacks’ morphology—long limbs and short torso—is conducive to running success. They can take longer strides and take fewer strides a race compared to someone of the same size that does not have the same limb length. When it comes to white swimmers, where the altitude is set by the body rising out of the water, whites hold a 1.5 percent speed advantage in swimming.

Though there are these anatomic differences that lend themselves to differences in elite sporting competitions, these differences do not lend themselves do the swimming and drowning gap in regard to blacks and whites. What explains those gaps is generational access to swimming pools; blacks were barred access to swimming pools just as they started to become popular in America, after the 60s when the country was desegregated. This led to swimming being looked at as “something that white people do”, and so, fewer and fewer black parents taught their children how to swim. Further cultural and social factors explain this, too. While I would assume that some of these aforementioned factors would then play a role in the black-white swimming/drowning gaps, I doubt that it would count for a super-majority of it. Thus, the gap can be closed by ridding the stigma that swimming is “something that white people do”.

The elite sporting gap in running and swimming, however, cannot be closed.

By RaceRealist in Race Realism, Sports on April 21, 2019.
← Usain Bolt—Anatomy and Physiology of a Champion: Bolt’s Record Times Can Be Better Social Constructivists about Race are Realists about Race →