“Mongoloid Idiots”: Asians and Down Syndrome

Look at a person with Down Syndrome (DS) and then look at an Asian. Do you see any similarities? Others, throughout the course of the 20th century have. DS is a disorder arising from chromosomal defects which causes mental and physical abnormalities, short stature, broad facial profile, and slanted eyes. Most likely, one suffering from DS has an extra copy of chromosome 21—which is why the disorder is called “trisomy 21” in the scientific literature.

I am not aware if most “HBDers” know this, but Asians in America were treated similarly to blacks in the mid-20th century (with similar claims made about genital and brain size). Whites used to be said to have the biggest brains out of all of the races but this changed sometime in the 20th century. Lieberman (2001: 72) writes that:

The shrinking of “Caucasoid” brains and cranial size and the rise of “Mongoloids” in the papers of J. Philippe Rushton began in the 1980s. Genes do not change as fast as the stock market, but the idea of “Caucasian” superiority seemed contradicted by emerging industrialization and capital growth in Japan, Taiwan, Hong Kong, Singapore, and Korea (Sautman 1995). Reversing the order of the first two races was not a strategic loss to raciocranial hereditarianism, since the major function of racial hierarchies is justifying the misery and lesser rights and opportunities of those at the bottom.

So Caucasian skulls began to shrink just as—coincidentally, I’m sure—Japan began to get out of its rut it got into after WWII. Morton noted that Caucasians had the biggest brains with Mongoloids in the middle and Africans with the smallest—then came Rushton to state that, in fact, it was East Asians who had the bigger brains. Hilliard (2012: 90-91) writes:

In the nineteenth century, Chinese, Japanese, and other Asian males were often portrayed in the popular press as a sexual danger to white females. Not surprising, as Lieberman pointed out, during this era, American race scientists concluded that Asians had smaller brains than whites did. At the same time, and most revealing, American children born with certain symptoms of mental retardation during this period were labeled “mongoloid idiots.” Because the symptoms of this condition, which we now call Down Syndrome, includes “slanting” eyes, the old label reinforced prejudices against Asians and assumptions that mental retardation was a peculiarly “mongoloid” racial characteristic.

[Hilliard also notes that “Scholars identified Asians as being less cognitively evolved and having smaller brains and larger penises than whites.” (pg 91)]

So, views on Asians were different back in the 19th and 20th centuries—it even being said that Asians had smaller brains and bigger penises than whites (weird…).

Down persons during waiting periods, when they get tired of standing up straight, crouch, squatting down, reminding us of the ‘‘squatting’’ position described by medical semeiotic which helps the venous return. They remain in this position for several minutes and only to rest themselves this position is the same taken by the Vietnamese, the Thai, the Cambodian, the Chinese, while they are waiting at a the bus stop, for instance, or while they are chatting.

There is another pose taken by Down subjects while they are sitting on a chair: they sit with their legs crossed while they are eating, writing, watching TV, as the Oriental peoples do.

Another, funnier, thing noted by Mafrica and Fodale (2007) is that people with DS may like to have a few plates across the table, while preferring foodstuffs that is high in MSG—monosodium glutamate. They also note that people with DS are more likely to have thyroid disorders—like hypothyroidism. There is an increased risk for congenital hypothyroidism in Asian families, too (Rosenthal, Addison, and Price, 1988). They also note that people with DS are likely “to carry out recreative–reabilitative activities, such as embroidery, wicker-working ceramics, book-binding, etc., that is renowned, remind the Chinese hand-crafts, which need a notable ability, such as Chinese vases or the use of chop-sticks employed for eating by Asiatic populations” (pg 439). They then state that “it may be interesting to know the gravity with which the Downs syndrome occurs in Asiatic population, especially in Chinese population.” How common is it and do they look any different from other races’ DS babies? 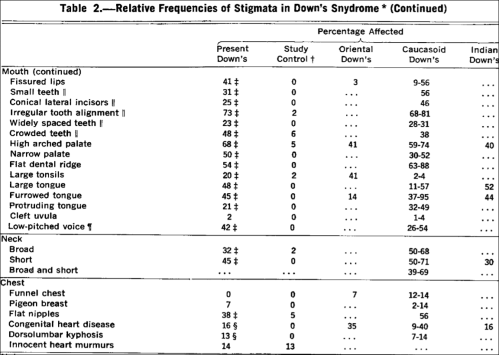 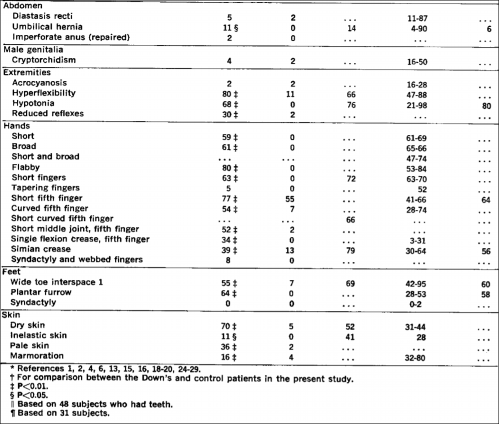 Emanuel et al (1968: 465) write that “Almost all of the stigmata of Down’s syndrome presented in Table 2 appear also to be of significance in this group of Chinese patients. The exceptions have been reported repeatedly, and they all probably occur in excess in Down’s syndrome.”

Examples such as this are great to show the contingencies of certain observations—like with racial differences in “intelligence.” Asians, today, are revered for “hard work”, being “very intelligent” and having “low crime rates.” But, even as recently as the mid 20th century—going back to the mid 18th century—Asians (or Mongoloids, as Rushton calls them) were said to have smaller brains and larger penises. Anti-miscegenation laws held for Asians, too of course, and so interracial marriage was forbidden with Asians and whites which was “to preserve the ‘racial integrity’ of whites” (Hilliard, 2012: 91).

However, it is also possible that establishing the racial supremacy of whites was not what drove this research on racial hierarchies. If so, the IQ researchers were probably justified in protesting their innocence, at least in regard to the charge of being racial supremacists, for in truth, the Asians’ top ranking might have unintentionally underscored that true sexual preoccupations underlying this research in the first place. It not seems that the real driving force behind such work was not racial bigotry so much as it was the masculine insecurities emanating from the unexamined sexual stereotypes still present within American popular culture. Scholars such as Rushton, Jensen, and Herrnstein provided a scientific vocabulary and mathematically dense charts and graphs to give intellectual polish to the preoccupations. Thus, it became useful to tout the Asians’ cognitive superiority but only so long as whites remained above blacks in the cognitive hierarchy.

Of course, by switching the racial hierarchy—but keeping the bottom the same—IQ researchers can say “We’re not racists! If we were, why would we state that Asians were better on trait T than we were!”, as has been noted by John Relethford (2001: 84) who writes that European-descended researchers “can now deflect charges of racism or ethnocentrism by pointing out that they no longer place themselves at the top. Lieberman aptly notes that this shift does not affect the major focus of many ideas regarding racial superiority that continue to place people of recent African descent at the bottom.” While biological anthropologist Fatima Jackson (2001: 83) states that “It is deemed acceptable for “Mongoloids” to have larger brains and better performance on intelligence tests than “Caucasoids,” since they are (presumably) sexually and reproductively compromised with small genitalia, low fertility, and delayed maturity.”

The main thesis of Straightening the Bell Curve is that preoccupations with brain and genital size is a driving part of these psychologists who study racial differences. Stating that Asians had smaller penises but larger heads though they were less likely to like sex  while blacks had larger penises, smaller heads and were more likely to like sex while whites were, like Goldilocks, juuuuuust right—a penis size in-between Asians and blacks and a brain neither too big or too small. So, stating that X race had smaller brains and bigger penises seems, as Hilliard argues, to be a coping mechanism for certain researchers and to drive women away from that racial group.

In any case, how weird it is for Asians (“Mongoloids”) to be ridiculed as having small brains and large penises (a hilarious reversal of Rushton’s r/K bullshit) and then—all of a sudden—for them to come out on top over whites while whites are still over blacks in this racial hierarchy. How weird is it for the placements to change with certain economic events in a country’s history. Though, as many authors have noted, for instance Chua (1999), Asian men have faced emasculinazation and femininzation in American society. So, since they were seen to be “undersexed, they were thus perceived as minimal rivals to white men in the sexual competition for women” (Hilliard, 2012: 87).

So, just like the observation of racial/country IQ are contingent on the time and the place of the observation, so too is the observation of racial differences in certain traits and how they can be used for a political agenda. As Constance Hilliard (2012: 85) writes, referring to Professor Michael Billig’s article A dead idea that will not lie down (in reference to race science), “… scientific ideas did not develop in a vacuum but rather reflected underlying political and economic trends.“ And so, this is why “mongoloid idiots” and undersexed Asians appeared in American thought in the mid-20th century. So these ideas noted here—mongloidism, undersexed Asians, small penis, large penis, small brain, large brained Asians (based on the time and the place of the observation) show, again, the contingency of these racial hierarchies—which, of course, still stay with blacks on the bottom and whites above them. Is it not strange that whites moved a rung down on this hierarchy as soon as Rushton appeared in the picture? (Since, Morton noted that they had smaller heads than Caucasians, Lieberman, 2001.)

The origins of the term “mongloidism” are interesting—especially with how they tie into the origins of the term Down Syndrome and how they related to the “Asian look” along with all of the peculiarities of people with DS and (to Westerners), the peculiarities of Asian living. This is, of course, why one’s political motives, while not fully telling of their objectives and motivations, may—in a way—point one in the right direction as to why they are formulating such hypotheses and theories.